On Sunday, September 22, 2019 we drive the route north from basecamp Dropzone A to Nijmegen. 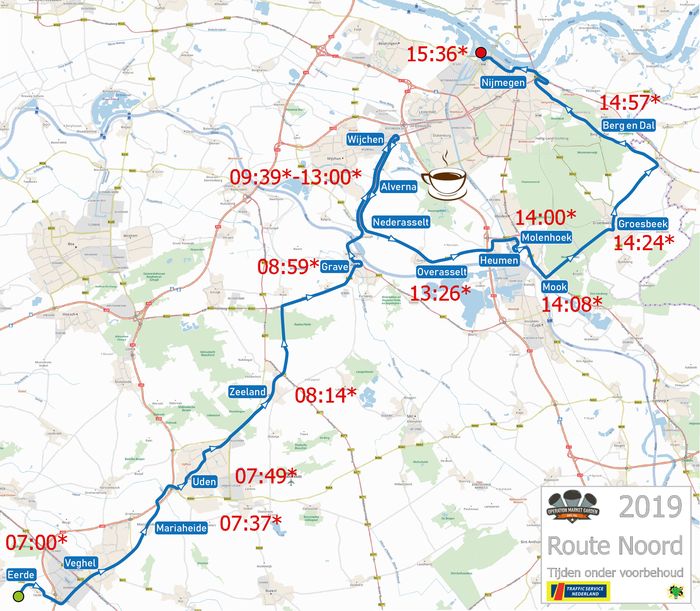 Here the 82nd Airborne Division lands with one (E) company of about 125 men south of the Maasbrug. This unit is in an isolated position and can not rely on help from the rest of the 504th Regiment that was dropped on the other side in Nederasselt.

Lt. John S. Thompson, jumpmaster in his Dakota, jumps with his stick as close as possible to the bridge. They land at barely 600 m in front of the casemates, on which anti anti-aircraft guns have been placed by the Germans.

Wading through ditches, the parachutists know how to avoid the fire. At the pumping station, the crew of the firing gun is put out of action with a bazooka. The southern bridgehead has been conquered.
The D and F company put the attack on the northern shore. After a fierce firefight with the dugged-in enemy, Lt. Middleton with a group up the bridge, jumping from beam to beam, shooting everything that seems to move.

On the other side they are met by Thompson, who laconically points to the mines he has laid, they are still new, you know.

The location where the landings started on 17 September to secure the bridge over the Maas. This succeeded in 1 day since the Germans were totally unprepared for the arrival of these paratroopers. In addition to conquering the bridge, they also played an important role in supplying the troops in Groesbeek. There was fierce fighting to liberate Nijmegen from crossing the Waal.

The F-company of the 82nd AB 504 PIR, indeed landed in Overasselt. But the E-Company, which finally took the bridge within 3 hours, John S, Thompson, landed in Velp near Grave. The intention was to close the bridge from two sides and thus prevent the bridge from being blown up by German troops.

In addition to conquering the bridge, 504th PIR also played an important role in supplying the troops in Groesbeek. On 20 September, it was paratroopers from the 504th Regiment that carried out the heroic Waal crossing.

Here the bridge was strong enough to carry the tanks over the Maas-Waal canal. This became a strategic point in the liberation of Nijmegen, since this was the only place where the heavy guns could move towards the Waalstad.

Located on the Maas and near Groesbeek this was an important supply route for the Allies who wanted to supply its troops during the battle of Nijmegen.

A village under the smoke of Nijmegen and against the border of Germany. The battle of Nijmegen had only just begun or Groesbeek was bombarded by Germans from the Reichswald in Germany. Until February 8, 1945, Groesbeek continues to be attacked by Germany before Operation Veritable begins. This operation leads the end of the Third Reich.